Illegal Immigrants In California Can Get Drivers Licenses? 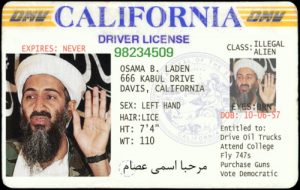 Here is yet another reason to hate the ol Golden State.

Illegal immigrants can run down to the DMV, show some chicken-shit birth certificate (probably printed on the back of their kid’s homework assignment) or god knows what other types of proof of “them saying who they say they are”, and get a driver licence delivered to their mailbox in 2 to 3 weeks just like everybody else.

What kind of shit is that!?

And here is the most important question of all…

WHY ARE THEY ALLOWED TO HAVE ONE?!

Illegal immigration has completely ruined the demographics of this state. And, in all honesty, I HATE IT.

Illegal immigration is gonna be a running theme here on this blog. Better get used to it.

It’s probably the biggest problem I got with this state. Oh, and knowing that guys like that bald headed asshole, Jerry Brown, in charge of shit who just loves illegal immigrants really pisses me off.

Here is the deal on why “our so compassionate politicians” here in California just LOVE the never-ending flood of illegals entering our state.

You think they really give a shit about Maria the house cleaner working at a place like this one here or Miguel the landscaper working for a local lawn care service?

You listen to them say shit like, “They are just doing jobs Californians won’t do.” or “These people come to California seeking a better life for their families.” and my favorite “we can’t break up families.”

All this California politicians want is a permanent underclass of people. They want people that are uneducated, people that don’t have skills, and most important of all; people that NEED government assistance.

Our boy Jerry Brown claims that it will make our streets safer by having these people properly licensed and insured.

Umm… someone tell this guy about the countless number of illegals getting into wrecks while being under the influence of an 18 pack of Bud Light, and just vanishing from the scene in a flash.

What’s gonna stop these people from using there brand new and legitimate ID from going out and using it to get a job?

Couldn’t they use this newfound privilege of going out and getting Geico auto insurance for their 1996 Chevy Astro van to instead go out and possible VOTE?

Why the hell not?!

You and I both know that this is all a scam and a way to pander to the Hispanic vote here in this state.

Sure, some might go out and vote illegally with their brand new driver license in hand. But, what you probably don’t know, is that these illegal immigrants kids CAN vote and will vote for the people that allowed their uncle Poncho to get a legit drivers license.

Wouldn’t you be a happy guy if your mom was now allowed to have a California ID when she couldn’t get one before and thank the people who allowed that to happen?

You know what the crazy thing is?

If you have kids, and you’ve been a little bit on the dead-beat-dad side of things for a while, and have fallen behind on paying child support, the state can suspend and take away your drivers license.

You, as a United States citizen, can lose your privilege to operate a motor vehicle. That privilege can be stripped from you!

Let’s just say you’ve been a deadbeat for a while and decided to straighten things out and do right by paying your damn bills. Wouldn’t you NEED that privilege to drive more than most people?

Wouldn’t you NEED it to get out there and find work to pay those fines?  Don’t you need to support your family and your way of life too?

You broke the law.

It’s not like you came from Jalisco, Mexico, jumped the border, created fake documents, and been working with a fake social for the past 8 years.

Nothing illegal about that!

And that’s my whole point.

In this state, illegal immigrants are treated like royalty!

They pander and bend over backward for these people.

Meanwhile, we got Californians that need work.

We got homeless vets sleeping in dumpsters. We got ghetto ass neighborhoods where the schools are shit and yet, we care about these illegal immigrants (which many hate this country by-the-way) more than we care about our own citizens.

That pisses me off and it’s one of many reasons I hate this state.