The Complaining Voice Of Modesto 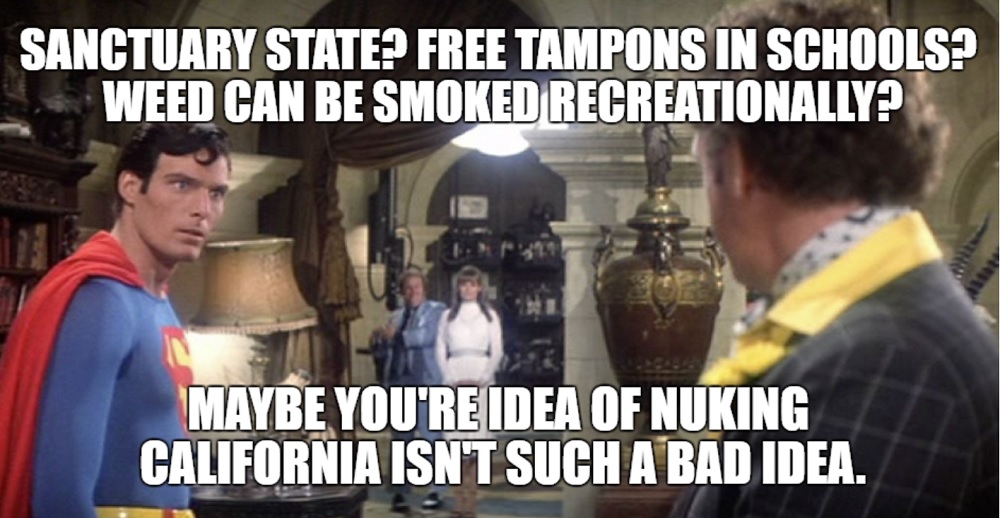 So, the new year has come and gone, and our wonderful California government has passed some real winners when it comes to laws for this 2018 year.

Let’s break them down, one at a time, and see how they are slowly flinging the state into a liberal utopia, shall we?

Don’t mind that federal law still prohibits it, but hey, since when does California follow suit with the rest of the state?

So, if you wanna get high (it’s not like you didn’t do it before) you can do so now legally. How awesome is that!? Millions of kids already think it’s cool to do it, and being that its “natural” there is no harm in doing so.

Hey, snake venom and the smoke from forest fires is all natural too, and that shit will kill you in a fucking heartbeat!

Next on the list – Free tampons for girls at school.

WHO THE HELL CANNOT AFFORD FUCKING TAMPONS FOR THEIR YOUNG DAUGHTERS!?

Whoever they are, the mother fuckers should give up their kids for adoption!

I have never seen so many “poor” people with smartphones, flat screen TVs, and smoking joints legally now and they can’t fork over $5 to $7 for a fucking box of tampons for their kid?!

So, now we, the taxpayers, gotta fork over the cash for it?

Job protection for parents in small businesses. AKA maternity leave.

So, let me get this straight…

If someone has a baby, you can take off 3 months or 12 weeks, an entire quarter of the year, to take care of the child, without the risk of losing your job?

For a guy? Seriously?

I remember my kid being born on a Tuesday night and I was back at work Wednesday morning!

What the hell am I going to do with the kid? Mom’s gotta from that bond with the little one, not the guy!

Get your pansy ass back to work!

So, companies gotta make do with fewer employees and can’t replace one that stops coming in to work cause they are protected by law for taking those many weeks off?

I say give them a week, at most!

They don’t come back? Fire their asses!

Employers are not allowed to ask for your previous work wages.

How are you suppose to wheel and deal at the bargaining table?

Supposedly, this is supposed to stop the gender gap in pay…

So how the fuck is that gonna help? Plus… There is no gender gap!!

I drove a concrete mixer for a lot of years. The pay is good. The work hours can be tough and not anyone can drive one of them heavy ass mother fuckers, so good drivers were always hard to find.

Do you think the owners of these concrete plant’s gave a shit if you were a guy or a chick? Think they cared if you were white, black, Hispanic, or whatever fucking race or culture you were?

If you can jump in one of them trucks and drive them well, you got hired!

Oh, and get this…

Everyone was paid the same!

Same is true with a manager at Lowe’s home improvement store, a janitor at a school, a correctional officer here in this state, a city worker, you name it.

So, now when I go in for a truck driving job, I can’t tell them and I can’t ask them what I used to get paid.

How we suppose to negotiate?

It’s like buying and selling a car without a ballpark price from Bluebook. Do we wing it?

What can I say about this?

I fucking hate it.

I can’t stand it.

But, it’s now official. The politicians in Sacramento have completely sold out their state and country for power.

I have always said that politicians pander and pander their asses off for votes, but this takes it to another level.

Governor Brown? Dianne Feinstein? Every other political rat in office here in this state are the worst of the worst.

These people couldn’t care less about all the Mexican families in this state and probably even hate and are disgusted by them in secret but will pander to them and make them believe that they are compassionate about their situation of them being here illegally.

This will only open up the floodgates for more illegal immigration and more criminals hiding out in this state.

We are going to have even more problems and more crime happen with illegals here in the country and these fucking people don’t even care.

I don’t know if it is the lust for power, fame, and likability or if it is just flat out cowardice.

So, afraid to be thrown out of office by fucking government loving foreigners, that they will ruin the state.

I only hope that Trump and the Attorney General will sue the shit outta the state for this and cut all Federal funding to it as a signal to Sacramento.

This state is heading down, spiraling out of control. Is there a better reason why people and businesses are leaving the state in droves! Take my buddy that does junk removal in Santa Barbara. He’s about to “jump ship” and bail outta Cali for good!

Someone has to put a stop to it before it’s too late. But, I really do think it already is.

Lex Luthor from the late ’70s, please oh please, nuke the San Andreas fault and sink half this bastard into the sea.