How can I put this lightly?

Honestly, I can’t. I hate our Senator here in California. In fact, I can’t stand her.

It’s that old bag that’s been lingering around Washington DC since 1992 and she been working in government and been in politics since the damn 60’s! 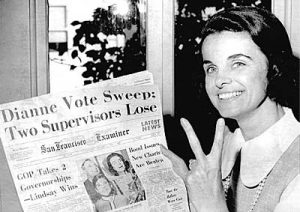 Case you didn’t know it, the geniuses in San Fransisco elected her Mayor back in the late 70’s all the way till the late 80’s.

That’s a decade of running the show there.

No wonder the earth shook beneath that town back in 1989 with that massive earthquake that stopped the World Series. Damn town was relieved to have her go and out of office!

She is a bleeding heart liberal through and through.

She hates guns. She hates the constitution. She probably hates the American flag, but she sure as hell LOVES illegal immigrants and liberal causes.

She doesn’t want shit like DACA to go away and she constantly supports things that are in favor of illegal immigration.

Why Do Dems Like Feinstein Always Beat The Same Old Drum About Breaking Families Apart With Enforcing Illegal Immigration Laws?

They act like they are SO compassionate, SO damn caring, SO generous, and SO tolerant.

These people just come to California to work. They only want to have a better life. They are doing the jobs other Californians won’t do. Yadda.. yadda… yadda…

The same old tried and true liberal clichés. Do these Democrats have some stupid little handbook with all the same old, tired, and worn-out lines they constantly turn to and repeat? Seriously, do they?

These people broke the law!

I can run down to the local supermarket and fill my cart full of food and run out the damn store without paying. I can say I did it cuz I just wanted to feed my family and didn’t have money to pay for it.

I broke the law. My ass is going to jail.

Oh, but not our illegal immigrant buddies right? They have protection and rights too…

People Like Feinstein claim all the things they do to help illegal immigrants is outta compassion.

You and I both know that they could give two shits about those people. I bet, that behind closed doors, they probably hate and are disgusted to be in their presence. All they want and need is those votes.

Oh, and the liberal press here in California just eats all that compassion shit right up!

the never-ending FLOOD of Illegal immigration?

Oh, and illegal immigration IS wait, it HAS wrecked this state already. I sure would love to go on a rant and really get into how, but I’ll save that for another post. 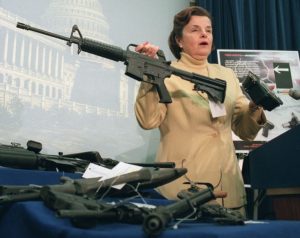 Then, of course, this huge-hearted and compassionate woman just HATES guns. She can’t stand them.

This old hag don’t even know what anything about guns and has been one of the biggest leaders in banning them! She bitches and complaints (while being guarded by armed guards herself) about them all the time!

She wants to ban assault weapons?

Umm… aren’t all guns used for assault? What is she even talking about?

You know what I would love?

Seriously, I mean this.

For this old bitch to stand up before Congress and flat out say that we need to repeal the second amendment to the constitution.

Just say it! Admit it! That’s what she wants!

At least I would have a tiny amount of respect for her. Why constantly dance around the damn subject and wait for mass shootings to bring it up all the time!?

She just a liberal ass old bitch that seeks only power by fooling people that aren’t educated into thinking that she’s looking out for them.

I am amazed that she represents California, and has for decades.

Well, actually I’m not. This state has gone down the shitter. It’s only fitting that she’s our Senator.

This post is brought to you by our friends over at PR Trash & Junk Removal. Another business in California that is fed up with this hag as Senator.